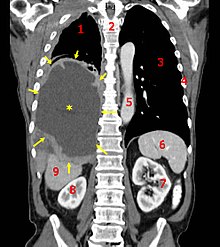 There has been a recent trend in asbestos litigation for the nasty defendants to request an autopsy from a terminally Ill plaintiff . Disgusting intimidation. So far the tactics have not worked. Last year a NJ judge denied a motion to actually exhume a body. Another story appears below.

Noting that Duncan could die before trial, Reicchold Inc., one of the companies Duncan has sued, asked the 22nd Judicial Circuit Court to let it conduct a “postmortem biopsy” to preserve 5 grams of Duncan’s lung tissue for testing.

Duncan’s attorneys with Simmons Browder Gianaris argued that there is no legal precedent for such an order and that autopsy decisions belong to the deceased’s family.

Judge Bryan Hettenbach sided with Duncan, finding that the biopsy is still an autopsy.

Autopsies involve public policy issues and issues involving property rights to the body of the deceased, according to the ruling.

Reicchold also failed to specify whom its proposed autopsy order would target, and what it would say, the judge found.

“Finally, the balance of the scientific arguments made by both parties make it appear unlikely that the results of the testing of the autopsy lung tissue would be conclusive as to defendant’s liability on plaintiffs’ claims in this case,” Hettenbach wrote. “Moreover, even if one accepts that more information is generally better than less, it appears less than certain that the test results here would even be probative.”

Simmons Browder Gianaris shareholder Ted Gianaris said Reicchold had tried to prove that it used “safe asbestos” or that there was no asbestos at all in Duncan’s lungs.

Asbestos defendants routinely try to claim that they use “safe asbestos,” when in reality all asbestos causes mesothelioma, Gianaris said.

“The defense’s argument distracted from the actual issue in this case: Mr. Duncan was poisoned by asbestos exposure decades ago, not by what might be in his lungs today,” Gianaris told Courthouse News. “The court seemed to recognize the autopsy was not going to provide probative evidence and was likely a red herring.”

Hettenbach’s ruling sets precedent for such motions in Missouri. Gianaris believes asbestos defendants will continue to make such requests in cases throughout the country, but hopes Hettenbach’s decision will influence how other courts rule on the matter.

“Mr. Duncan is alive and fighting the terminal disease mesothelioma,” Gianaris told Courthouse News. “He should get his day in court this fall. The judge’s ruling gives his family peace of mind that they will not be ordered to do something against their will down the road. … We think this order ends the argument.”